skip to main | skip to sidebar

Okay. So. I think this is the total list of cinema Q&As I'll be doing:

October 30th. Dublin. But I don't know which cinema. Argh.

Really very nice to hear Glenn Wheaton and Jim Channon say the Goats book is true. They don't love saying it. So it's jolly nice.
Posted by Jon Ronson at 8:19 pm 1 comment:

Posted by Jon Ronson at 1:02 pm No comments:


The Men Who Stare at Goats

A serendipitous marriage of talent in which all hearts seem to beat as one, "The Men Who Stare at Goats" takes Jon Ronson's book about "the apparent madness at the heart of U.S. military intelligence" and fashions a superbly written loony-tunes satire, played by a tony cast at the top of its game. Recalling many similar pics, from "Dr. Strangelove" to "Three Kings," and the screwy so-insane-it-could-be-true illogic of "Catch-22," this is upscale liberal movie-making with a populist touch, in Coen brothers style. Enthusiastic welcome at Venice, likely to be echoed at Toronto, should translate into friendly biz Stateside in November.

Coming in at a tight, well-paced 93 minutes, Grant Heslov's second feature -- after his little-seen anti-corporate golf comedy,"Par 6" (2002) -- clearly benefits from his close working relationship with star George Clooney, following their writing collaboration on "Good Night, and Good Luck." It also benefits from the dense but pacey screenplay by Brit playwright Peter Straughan, whose credits include "How to Lose Friends and Alienate People" and "Mrs. Ratcliffe's Revolution."
"Goats" is officially "inspired" by Ronson's book, which accompanied a three-part docu series, shown on Blighty's Channel 4 in late 2004, called "Crazy Rulers of the World," tracing some of the U.S. military's more outre ideas for policing the world, terrorism in particular. Straughan's screenplay takes many of the stories from the book -- apparently true, per Ronson, who's made a career from recounting "true tales of everyday craziness" -- and, as a way into the material, invents the character of a small-time, Ann Arbor, Mich.-based journalist, Bob Wilton (Ewan McGregor), who's desperate to get into Iraq at the time of the Bush invasion.
After a comically cautionary intertitle ("More of this is true than you would believe") and an opening gag (repeated, with a variation, at the end) that immediately sets the tone, the first reel is thick with info and time shifts from the present (starting in fall 2002) back to the early '80s, which are a tad difficult to digest on first viewing.
In a nutshell, Wilton, assigned to interview Gus Lacey (Stephen Root), an apparent wacko who claims he has special psychic powers, stumbles across an even crazier story: Back in the '80s, the government had a top-secret unit of "psychic spies" who were trained to kill animals by staring at them. The most gifted of the group, says Lacey, was a certain Lyn Cassady.
Wilton heads for the Middle East in spring 2003, looking for a good war story. Stuck in Kuwait City, he bumps into "Skip" (Clooney), who initially claims to be an Arkansas trashcan salesman but is actually Cassady, who's been reactivated and is on a super-secret black-op mission to Iraq.
As the two bond, and Wilton persuades Cassady to take him along, it's clear Cassady's elevator stops well short of the top floor. Claiming to be a "remote viewer," "Jedi warrior" and several other things in between, Cassady fills Wilton in on the formation 20 years earlier of the New Earth Army, brainchild of a Vietnam vet-turned-New Age hippie, Bill Django (Jeff Bridges, with goatee and pigtail).
In one sequence straight out of the Joseph Heller playbook, the U.S. military decided to adopt Django's New Earth manual, written with liberal doses of LSD, as a new template for ways of policing the globe. "We must be the first superpower to have super powers," exhorts Django, setting up a squad of psychics he dubs "warrior monks."
As the pic flip-flops between flashbacks illustrating Cassady's narrative and the present time, the pair get lost in the desert, kidnapped and traded by terrorists, and then lost again in the desert. Meanwhile, the backstory progresses to a point where one new member, Larry Hooper (Kevin Spacey), tried to sabotage the NEA, prepping the movie for its acidly funny climax.
Incredibly dense screenplay traverses not only 20 years of U.S. military abitions, starting in the Reagan era, but also provides its own riffs on such public scandals as Abu Ghraib and Guantanamo Bay. What saves it from getting dramatically tripped up by its own populist grandstanding are the leading perfs, which motor the movie far more than the messages.
As the completely nuts Cassady, Clooney anchors the movie in a beautifully calibrated demo of comic timing and sheer physical presence. More than just his nebbish straight man, McGregor has some of the best lines, slicing through Clooney's utter self-conviction with a handful of well-chosen words. Bridges, channeling "The Big Lebowski," fits Django like a glove, and Spacey's appearance midway adds some welcome tartness to all the New Age weirdness.
Robert Elswit's beautifully composed widescreen lensing of New Mexico's deserts (standing in for Iraq) and Puerto Rico (repping Vietnam and other locations) is aces, without dominating the characters. Other tech credits, including Tatiana S. Riegel's smoothly succinct editing, are top drawer.
End crawl stresses that though some characters are based on real people (the New Earth Army was reportedly the idea of a certain Col. Jim Channon), the movie is a work of fiction. Yeah, right.
More than one option
More than one option
More than one option
More than one option
Camera (Deluxe color prints, Panavision widescreen), Robert Elswit; editor, Tatiana S. Riegel; music, Rolfe Kent; music supervisor,Linda Cohen; production designer, Sharon Seymour; art director, Peter Borck; costume designer, Louise Frogley; sound (Dolby Digital/DTS Digital/SDDS), Edward Tise; sound designer, Mark Mangini; visual effects supervisor, Thomas J. Smith; special effects coordinator, Kevin Harris; assistant director, David Webb; casting, Patricia Alonso. Reviewed at Venice Film Festival (noncompeting), Sept. 8, 2009. (Also in Toronto Film Festival -- Gala Presentations.) Running time: 93 MIN.

Posted by Jon Ronson at 9:46 am No comments:

Men Who Stare At Goats Venice and Toronto

Here's all the information for the Toronto Goats screening. I can't find a page for the Venice screening, even though it's a big deal. I just don't think the Venice film festival goes in for fancy websites. 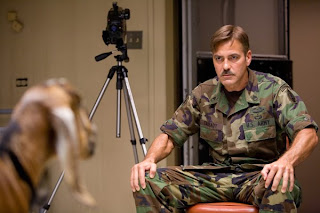 Like a twenty-first-century Dr. Strangelove, The Men Who Stare at Goats takes war to its illogical conclusion, with hilarious results. George Clooney, Ewan McGregor, Kevin Spacey and Jeff Bridges are in top form in this uproarious tale about a top-secret brigade of psychic soldiers trained in New Age warfare. Amazingly, it's based on a true story.

The source is Guardian columnist Jon Ronson's surreal non-fiction account of the U.S. army's attempts to harness psychic and paranormal power in the wake of the Vietnam War. Director Grant Heslov, Clooney's collaborator on Good Night, and Good Luck, finds just the right tone for the absurd goings-on.

Down-and-out journalist Bob Wilton (McGregor) stumbles over what might just be the biggest story of his life when he meets Lyn Cassady (Clooney). Cassady claims to be part of a military unit called the First Earth Battalion, a group of super-soldiers trained to don cloaks of invisibility, run through walls and kill goats simply by staring at them. As Bob soon finds out, the battalion has been reactivated for the “war on terror,” and so he sets out across the Iraq desert with Cassady in search of the missing founder of the brigade, Bill Django (Bridges). Once a GI Joe-type commando, Django had a battlefield epiphany that moved him to grow his hair long, join drum circles and dream up the psychic soldiers idea. He encourages his new troops to stop shaving, wear long robes and dance as part of their combat training. One key weapon in their less-than-conventional arsenal: the mysterious “sparkling eyes technique,” of which Cassady is especially proud. Scarcely able to believe what he's seeing, Wilton follows Cassady through dangerous terrain as they cross Iraq on a top-secret mission.

Working from a sharp, witty script by Peter Straughan, Heslov and his cast have a blast with the quick quips and jaw-dropping situations. For Clooney, this is a leap forward from his early satire Three Kings and a perfect companion to Up in the Air, also playing at the Festival. He has an unerring talent for comedy that's both brainy and completely nuts, and he has never been better than he is here.


Grant Heslov was born in Los Angeles and began his career as an actor. He has directed the short film Waiting for Woody (98) and the feature Par 6 (03). He co-wrote the script for Good Night, and Good Luck (06) with George Clooney, and served as co-producer in addition to playing a supporting role. The film received six Academy Award® nominations, including best original screenplay and best picture. The Men Who Stare at Goats (09) is his second feature film.
Posted by Jon Ronson at 6:44 pm No comments: